Marianské square in Jablunkov is dominated by a fountain with a statue of Mary Immaculate.  It is a Baroque sculpture from 1655. The composition of the sculpture is structured into smooth cartouches, the volute base with wings decorated with bell-flower motif ornaments liven up by three cartouches with cherubs. It represents high artistic value of the object. The octagonal fountain is much older and it was attached to the sculpture after the World War II. 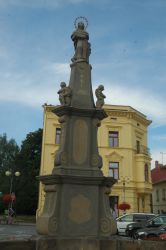 There is the Statue of Resting Woman under the side wing of the sanatorium in the park. This statue is from the year 1933. It is mounted on a low rectangular pedestal and a prism base created from four concrete blocks. It depicts a seated female robust nude with loose long hair. It is a creation by Vincenc Makovský. Furthermore there is a sculpture of two women located in the park. It is a Vincenc Makovski creation as well. This is a sculpture of two seated women from the 1930th mounted on a rectangular brick base. It depicts a pair of robust young women with loose hair and slightly revealed breasts covered in a freely flowing drapery.  The Statue of Humanity from the 1940th is mounted on a smooth prism pedestal. It depicts standing robust young woman with loose hair holding a book with the inscription "Humanity"in her right hand and a bouquet of flowers in her left hand. It is a creation by Jan Tříska. The last statue in the park is a little-known Statue of Seated Woman by V. Makovský sometimes called a goddess of fertility. 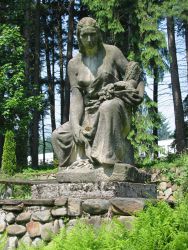 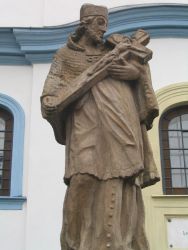