A unique collection of trees in the Beskydy lung institute park. The health resort was established at the confluence of the Lomna River, which flows 800 metres through the park and is one of its beauties and Ošetnice stream at an altitude of 401 meters. The lung institute has an advantageous position. In a maximum of five kilometres in radius, beautiful mountain peaks are rising up. This wall covered with forests supplies the hospital with fresh mountain air. There is a group of lovely decorative trees to see with extremely grown beech tree with overhanging branches and elm, which is also of overwhelming type, which creates a cascade of branches and a mushroom crown shape. Interesting exotic trees grouped around large meadows offer beautiful vistas and different spectacles in every season. The right side of space outside the main entrance to the hospital is lined mostly with different kinds of colour spruces. Sculptures by Vincent Makovsky and Jan Tříska are situated in the park. They are The Resting Female Statue, The Statue of Two Women, The Statue of Humanity and The Statue of Seated Women. The sanatorium building itself is historically protected object. In the 1990, there were significant interventions in the appearance of the arboretum. Dozens of trees were cut down, new walking paths were created, new benches and shelters were installed. All major botanical species were marked with label. Until a few years ago, the park was closed to the public. Today it is freely available at your own risk. 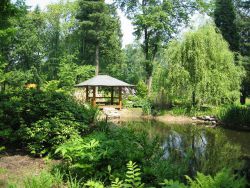 By the ancient trade route that has been linking Silesia and Slovakia since long time ago, on a rocky promontory between Bystřice and Jablunkov was a strong fortress once called "Belko" named after its master. Bandit knight Belko, however began to be chased by horror dreams and according to legend he jumped off the cliff on which he had his mansion. There is an outdoor snack bar on the opposite bank today, a pool where he ended his sinful life now attracts in the hot days for bathing.

In the village of Hrádek ve Slezsku under the bridge in the riverbed of the river Olše there is a geologically interesting thing - locally called "plates" (boilers). Excavations in the rock were created by the flow of water. Furthermore, in this village is an interesting canyon of the river about 1 km long and 10m deep. The canyon is also the starting point for boating tours on the river Olše.